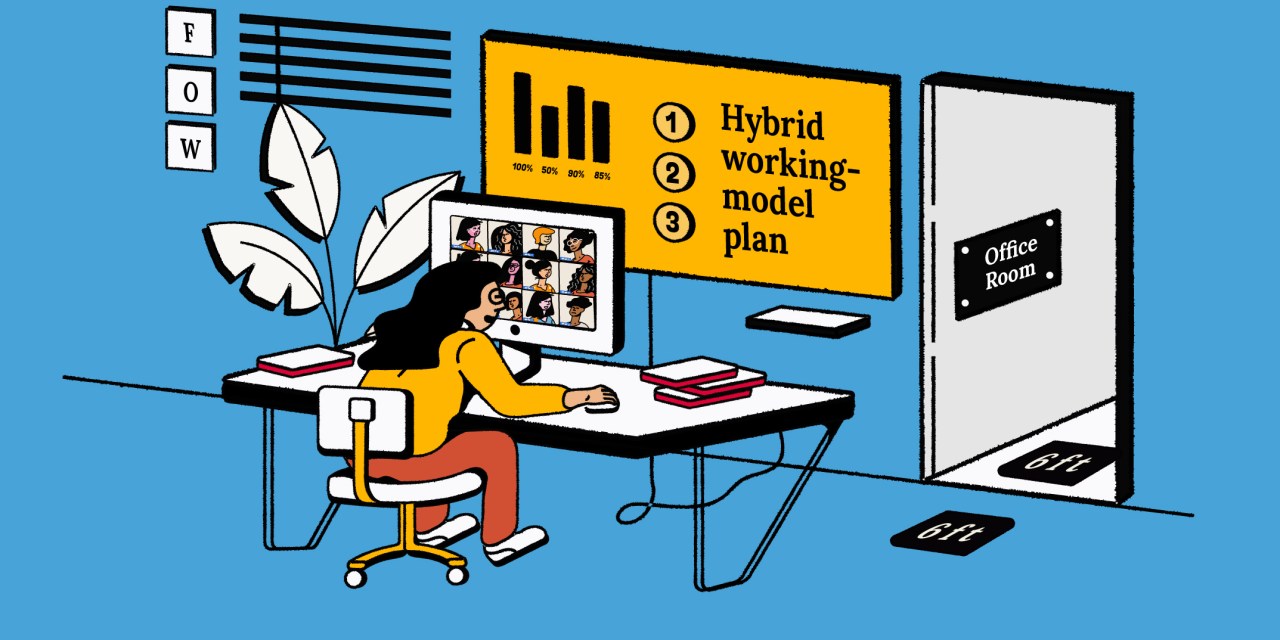 Figuring out the perfect hybrid-working model is going to be one giant, universal learning curve. There’s no one-size fits all, no instant playbook for what works. Instead, business leaders must get comfortable tweaking strategies to find the best model, probably for years to come.

Naturally, some employers will be more more comfortable with that approach than others — Microsoft is among them. The company has gone all-in on the hybrid setup for its 160,000 staff and has clocked up some useful lessons.

We spoke to Nick Hedderman, director of Microsoft’s modern work and security business group in the U.K., about what the company has learned so far. Here are the takeouts:

Get comfortable with experimentation, fast

If patience is your enemy, the next few years will be tough. The journey toward nailing a hybrid-working environment that works not just for staff but also for clients, will be long. And when it comes to what good looks like for hybrid, there is no simple answer. Hedderman believes success will lie in an employer’s willingness to experiment. “It’s going to be fundamental to ground the [hybrid-work model] journey in experimentation,” he said. “And companies will have to be very humble because no one will have the right answer.”

Microsoft regularly runs a bunch of both large and small-scale hybrid-working experiments and quickly discards any that don’t stick and scales those that do. While the delta variant has led to widespread delays of office reopenings, the logistical challenges of managing people’s return remain plentiful. One example: After 18 months of not having to commute to work, people don’t want to turn up and find no one else has picked that day to be in the office.

“This is a challenge that customers come back to us with a lot — what’s the best use of their time and how do they know when they should be in the office?” said Hedderman. To try and solve the issue, Microsoft has begun looking at how to connect the machine learning from its Microsoft Graph, to all the different networks with which people typically digitally interact. “We’re looking at whether we can somehow link that together with — for instance — the badging system from our office buildings.” The theory is that people could then predict when colleagues they need and want to see typically go into the office. “That’s a broader scale experiment, and it may not work, but you’ve got to be open to doing these sorts of things in order to help the hybrid environment flourish and come to life,” added Hedderman.

Appoint a moderator for hybrid meetings

Maintaining inclusivity when large proportions of staff are working remotely will be a challenge in hybrid setups. In theory, diversity and inclusivity should improve now that employers can cast their hiring net further, as a result of the work-anywhere trend. But on the flip side, proximity bias is a risk and one of the most obvious places it will manifest is in hybrid meetings. Hedderman’s advice: Assign a moderator for every meeting with more than five people attending. This doesn’t need to be the manager, it can be anyone in the meeting, but their role is to ensure all cameras are on and that everyone gets their say. Plus, any informal chat around the meeting happens with everyone in the office as well as working remotely, tuned in. “You’ve got to have a really good meeting moderator to ensure it’s an inclusive meeting. I’d go as far as to say you need to teach moderation to all employees,” added Hedderman.

The moderator would also check on the chat window, look out for digital raised hands, read the cues and body language on people’s video feeds. If someone is frowning when someone else is talking, the moderator should be astute enough to pick up on it and invite them to speak their mind, added Hedderman. “There are times when you stray into the old ways of behaving. This is more about adoption of change management than it is the technology.” It’s the layer of behavior and culture that’s critical. “It’s a confidence thing and there is some skill to it. There’s a technique to moderating a meeting well,” he added.

Be a role model

Employers going all-in on hybrid must lead by example for it to stick. “If companies embrace hybrid, it’s the biggest change to the way they work since Henry Ford invented the weekend,” said Hedderman. “It won’t happen by mistake but through strategy and it’s got to come from the top — you can’t delegate hybrid to HR or have a half-baked plan that fizzles out after the summer. The leader, chairman or CEO — whoever that person is in the business, needs to lead that conversation and be very humble about the journey. Because they’re not going to be right. No one’s going to be right. They are going to have to swallow that ego a little and role model these new behaviors.”

For hybrid to truly be a success, it requires a collective effort — from senior leadership, through to team managers and individuals themselves. “For managers, it’s about team coordination skills. It’s about individual employees taking control and being intentional about what it is they need to do, and how when and where they do it best,” said Cali Yost, CEO and founder of consultancy Flex+ Strategy Group. “It’s about the business owning a new way of operating, that is enabled in one part by HR making sure there’s a clear performance management system in place, and that people have the skills and tools they need to execute the work.” But making these hybrid set-ups work in the day-to-day business, it’s going to take senior leaders aligning around a shared vision of what the plan is, and ensuring they lead by example, she added.

Asynchronous working, which lets people respond to work messages and add to projects at times that fit their individual work schedules, will likely grow in popularity. To get it right, it’s important not to be over zealous on the number of channels used, within whatever company tools are used to communicate — whether it’s Microsoft Teams, Salesforce, Google Docs. Hedderman advises not to go over seven channels. These channels are where the asynchronous work happens. “Every leader needs to think about asynchronous working,” he said. “I’ve got a general channel, a channel around ‘rhythms of business’, I’ve got one around products, people and channels within teams.”

So, if Microsoft is getting ready for a product launch, Hedderman will write the plan for it in a Word document and post it into his product channel. Most major tasks require an element of teamwork so he can add people he wants to contribute and they will receive an alert to show they need to add to the document. “The process then gets richer as more and more people contribute,” he added. Although certain people are alerted, anyone in that channel can view its progress. “There are about 20 of us in this particular group and it fosters this culture of openness. No longer is knowledge power, knowledge is about sharing and helping. And it’s enriched by having different people’s perspectives included in it,” said Hedderman.

Like most things in this hybrid world, establishing the right blend of asynchronous and synchronous working is the sweet spot. In-person meetings will always be valuable although more and more people are recording them and catching up asynchronously. Getting the right balance will be down to the individual.