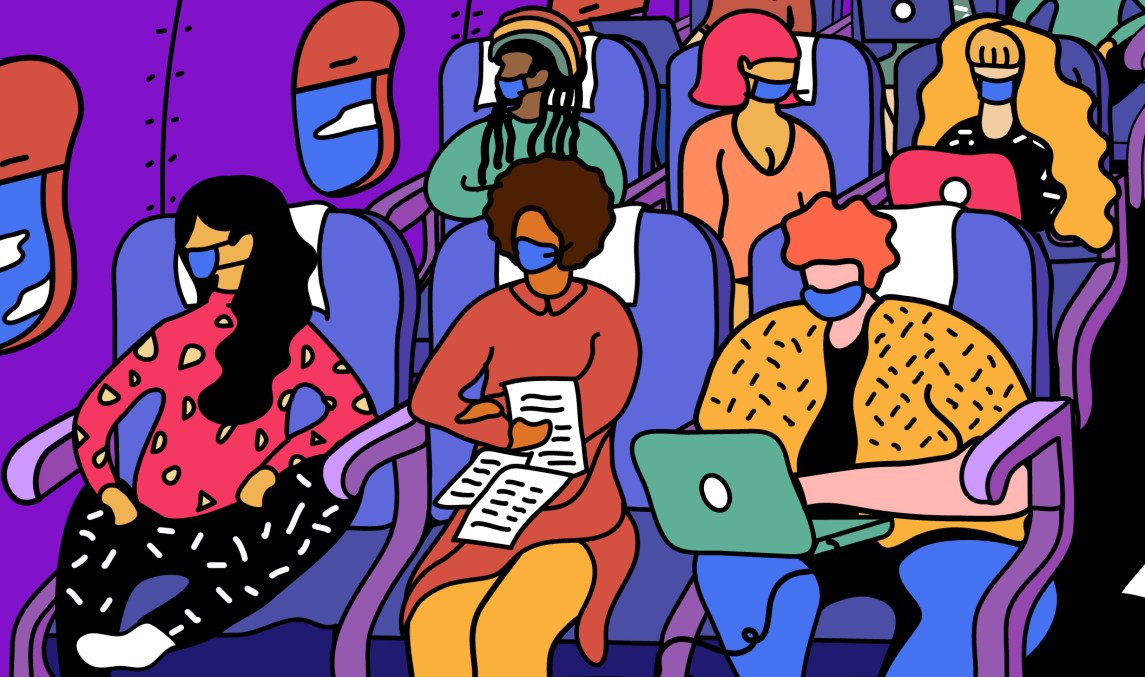 It’s been a week since Mike DePauw, executive director of Minneapolis digital agency KC Truth, took his first work trip in more than a year — and while he had fretted in the runup about socially-distanced meetings, elbow bumps and the general awkwardness of returning to interactions in the flesh, it quickly became clear that he and everybody else was beyond ready to get down to business.

“While the past year has taught us that we can work virtually, this trip reminded me of the importance of face-to-face meetings, especially in building connections and trust with our clients,” said DePauw, whose firm has done work for clients like Transamerica and 3M. “My calendar is now open, clear and ready to be booked for in-person meetings.”

If there were any doubts Americans are ready to hit the road again, they were obliterated over the Memorial Day weekend, when the Transportation Security Administration screened more than 7 million people — the busiest period for the airlines since the pandemic struck. Likewise, businesspeople are also taking to the skies, among them marketing professionals who have been waiting for the moment they could resume meetings with clients, prospects and their own employees from city to city.

A recent survey by the Association of National Advertisers found that 77% of vaccinated marketers said they would be willing to travel domestically for either personal or business reasons, compared to 23% surveyed in February. The study also found that an increasing number of companies are now allowing business travel for executives.

Jacqui Gifford, editor-in-chief of Meredith Corp’s Travel and Leisure, said other signs point to business travel coming back, including rising prices for hotel rooms and airplane tickets and hotels getting booked for everything from small meetings to large conventions (Gifford is attending one in Las Vegas this August). There’s more of a comfort level with business travel now than there was even just a couple of months ago, she pointed out. “Is it going to feel exactly like 2019? Probably not,” she added. “But things are changing so quickly.”

Aside from DePauw, another marketer getting back in the swing of things is Andy Nathan, founder and CEO of Boulder, Colorado-based creative agency Fortnight Collective, who visited Santa Monica, California last week — his first trip since last February. “Summer is back, traveling is back, opening the country is back, marketing campaigns targeting the intrepid traveler are back, all in a very big way,” said Nathan, whose clients include Patagonia and Yo! Sushi.

Jessica Hong, head of content at the global creative shop Stink Studios, which has done work for Google and Peloton, said the difference between travel now and a trip she took to California for a shoot back in December — a flight memorable for a lack of food, tiny sips of water under two masks, and being jostled by passengers’ every cough and sneeze —is striking. Now, six weeks past her second Moderna shot, and she’s back on a plane for another production, wearing just one mask, drinking water at “normal human intervals” and catching up with colleagues on Slack with coworkers thanks to pretty decent WiFi on planes. “I don’t know if it’s normal, but it feels good,” she said.

That doesn’t mean there still isn’t wariness on the part of some marketers. “Our teams are feeling the same about resuming business travel as they are about resuming in-person work, a bit of anxiety but also pragmatism borne of the pandemic,” said Eric Moore, CEO of IPG’s Elephant, with clients including Kia and Beats.

High levels of productivity during the pandemic have the agency’s leadership, like that of so many other companies, wondering whether the travel it sustained previously was, in all cases, business-critical. Moore recalled that prior to last March, he made regular trips between the firm’s U.S. offices, creating an imbalance in his life and an outsized carbon footprint to boot. “The pandemic taught us that the conventional way of doing business was broken, inclusive of travel, and out of balance,” he said. The agency’s approach to business travel will now be “highly discriminating,” he said, and voluntary. “At a fundamental level, we thrive on human interaction, we’re not robots, but we don’t need to use travel as a crutch for lack of focus, individual rigor and hard work,” he said. “Achieving the right balance will be key.”

Cost is, of course, another factor as bosses and clients eye a return to the road. Barry Lowenthal, CEO of The Media Kitchen, a division of the Forsman & Bodenfors collective and part of MDC Partners that has done work for Vanguard and Loews Hotels, said that while technology has shown everyone there’s a way to stay connected even when we’re homebound, it’s also demonstrated how much doing business in person matters — when it is called for. “Just think about how much clients and agencies will save in travel and expenses, which I’m sure will translate to more competitive rates,” he said, adding, “I imagine travel budgets will be a fee negotiation in 2021-2022.”

Howie Kleinberg, president of the New York content marketing agency Glow, whose clients include Showtime and TBS, said a rebalance in business travel is overdue. “In the old way of doing things, we’d jump on a plane at a moment’s notice, fly across the country and burn a few days in L.A. client meetings. But that comes at a cost. Not only does saying yes to every business trip burn productivity and take hours away from the creative product, but it also takes employees away from their personal lives and families. Today, we have a new responsibility to create the future of how we want to work.”

“Going forward, I can see why it doesn’t make sense to travel for every little occasion, for both environmental and practical reasons,” said Sander Volten, global CEO of Amsterdam-based 180, which has created campaigns for Sony’s PlayStation and Lululemon. “However, I still believe there’s incredible value in meeting a client, a colleague or a potential partner in person. It builds bonds that translate in stronger collaboration and ultimately more positive outcomes.”

Steve Miller, executive creative director, vp and partner at FUSE Create in Toronto, whose clients include CIBC and Ricola, added: “When you’ve got clients outside of your own backyard, face time, the meet and greet, and the ability to build and strengthen the relationship in person far outweigh the inability [to do so] via Zoom. And with the right health precautions— masks, washing hands, vaccinations — I think the client face time and conversation is important enough to get traveling again.”

Steve O’Connell, partner and co-chief creative officer at Philadelphia-based Red Tettemer O’Connell + Partners, whose clients include Under Armour and Planet Fitness, said he has tons of travel on the books. “Although we’ve all been living in fear for so long, it’s going to take a while to shake off the feeling that we’re doing something we shouldn’t,” he said. That caution – or paranoia, depending on one’s point of view – will remain a defining characteristic of agency shoots, he predicted, noting that at a recent shoot he had to take three COVID-19 tests within 48 hours.

“I’m sure those kind of safety measures will stay with us for a bit,” he said. “But given the past 14 months, I have no complaints. Bring on the nasal swabs.”