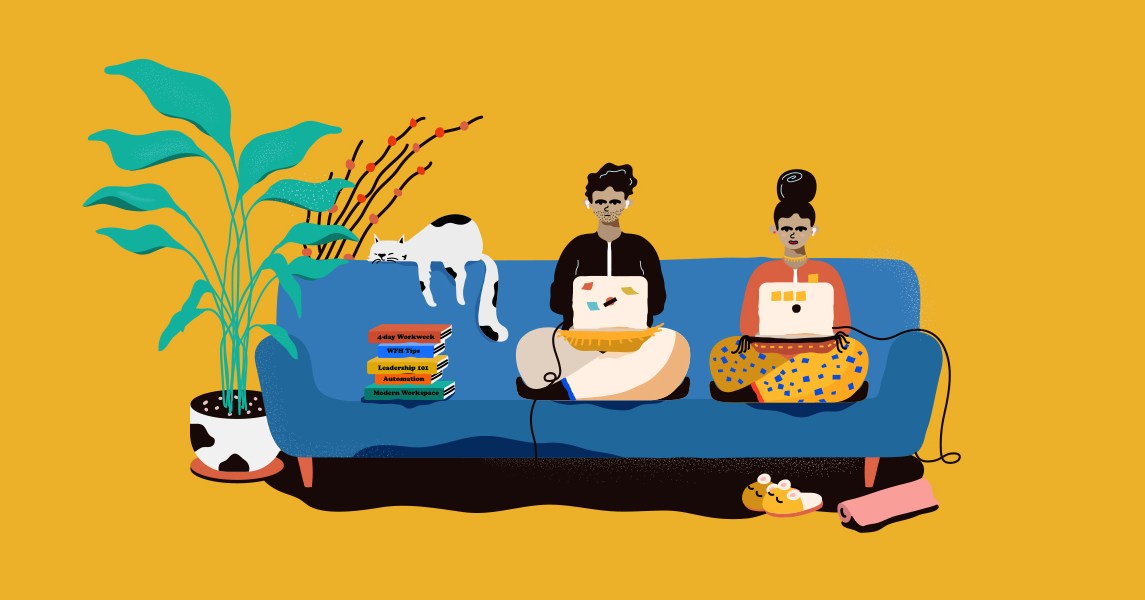 At ad agencies, dating a coworker is nothing new. Neither is keeping that relationship a secret. Quarantining with the colleague you’re dating and continuing to keep it a secret all the while taking client calls and Zooming with your other coworkers, however, is new.

“It’s stressful because not all our colleagues know,” said a creative director at a London-based creative agency who has been dating a strategist at the same shop for nearly a year. “So when the doorbell rings and we’re on a call, it gets awkward.”

Over the past six weeks, as agencies transitioned staff to working from home, couples who work at the same agency have created their own mini-remote offices as they are now quarantined with their coworker and partner. Doing so doesn’t come without its own set of challenges.

For example, the London-based pair is one of three couples interviewed for this piece — nine couples total were interviewed — who requested anonymity as their coworkers are unaware of their relationship. Others said that even though that hadn’t hid their relationship, seeing them quarantining together came as a surprise to clients and some coworkers.

“In the beginning of quarantine, there were still lots of people at the agency who didn’t know we were married,” said Jesse Unger, strategy director at TBWA\Chiat\Day LA. Unger has been married to TBWA\Chiat\Day LA art director Ryan Buckley for two-and-a-half years and together for 12 years total. “We accidentally surprised quite a few people when we showed up together on video calls.”

Letting people know you’re a couple isn’t the only issue while quarantining together. Other issues like managing space, overlapping calls and talking shop too much and the overall blurring of work/life balance can be problematic.

Still, the couples say they are thankful to have a colleague to bounce ideas off of and that they’ve got a new respect for their partner’s work habits or pitch tactics. Others say being around someone who knows their moods and rhythms has helped them manage the stress of creating new work and managing client calls.

“It’s a rollercoaster of emotions magnified by the light of a thousand suns; it’s gratifying, rip-your-hair-out frustrating, intimidating and a tad serendipitous,” said Katie Walley-Wiegert, brand communications manager for The Martin Agency of working with her husband of nearly a decade, Taylor Wiegert, vp of strategy at The Martin Agency, at home. “Taylor’s my full-time support system above all else, so I’ll call myself infinitely lucky.”

That sense of support can prove doubly helpful for couples who are also creative teams. For BBDO LA’s Kory Brocious, art director, and Ally Farrish, copywriter being quarantined together has led to more projects and responsibilities, said Brocious, adding, “We’ve been able to prove how effective we can be. There’s an added benefit to being able to concept in person rather than doing it over a chat or a Zoom call.”

“If they call one of us they know the other is there and that we’re easily accessible,” said Farrish, adding that the couple has been together since last August and worked as a creative team for the last year and a half. “If we were quarantined separately, it might be harder to wrangle [us for a new project].”

For Farrish and Brocious, taking Zoom calls together has become a new norm. That’s easy for couples who are working on the same project. For others, especially those in tiny apartments, finding areas of solitude to work or take calls has proved particularly challenging. Some say they split time between the bedroom and the living room. Others have had to get more creative.

“I’ve turned the bathroom into a substitute call-center when there’s no other option,” said Unger, adding that the couple lives in a small one-bedroom apartment and when they’re both on Zoom calls it can be a “huge pain in the ass.”

Unger continued: “Ryan’s been banished to the outside more than once. When we do go our separate ways, the dog has no idea who to choose — she runs back and forth between the two rooms, which ends up being more distracting than if we had just stayed in the same place.”

Unger and Buckley aren’t alone. For The Martin Agency couple, managing space and call times is also difficult, though they do work in the same room when there’s a lull in the meeting schedule.

“Our work orbits don’t really overlap that much, so being in the same room all the time would be tough, especially when we have meetings,” said Wiegert. “We’d just be talking over each other.”

Of course, issues don’t only crop up when it comes to space or calls. To manage disagreements — personal or work-wise — a pair of junior creatives at VMLY&R in London, Matt Jones and Abigail Stephenson, designated a “speaking elephant,” where “you’d only be allowed to speak if you were holding the stuffed elephant toy,” said Jones. “It went missing after two days. Abigail is offering a cash reward to anyone that has any information.”

The threat of embarrassment is also higher when working at the same agency. “There’s definitely an added layer of stress to the whole peeking-into-the-room ‘Are you on a call?’ miming action,” said Sarah Wallace, art director at McGarrah Jessee; Wallace has been dating McGarrah Jessee strategist Nick Carr for three years.

“It’s one thing to burst into the room screaming about Gigi Hadid’s pregnancy news when it’s in front of your partner’s coworkers, it’s different when it’s your own coworkers and they can make fun of you for it.”