With vaccines being rolled out later this year, employers are looking at ways to make the future of the work hybrid. Many believe that we’ll see the disappearance of the open-plan layout, where spaces are filled with traditional banks of desks. 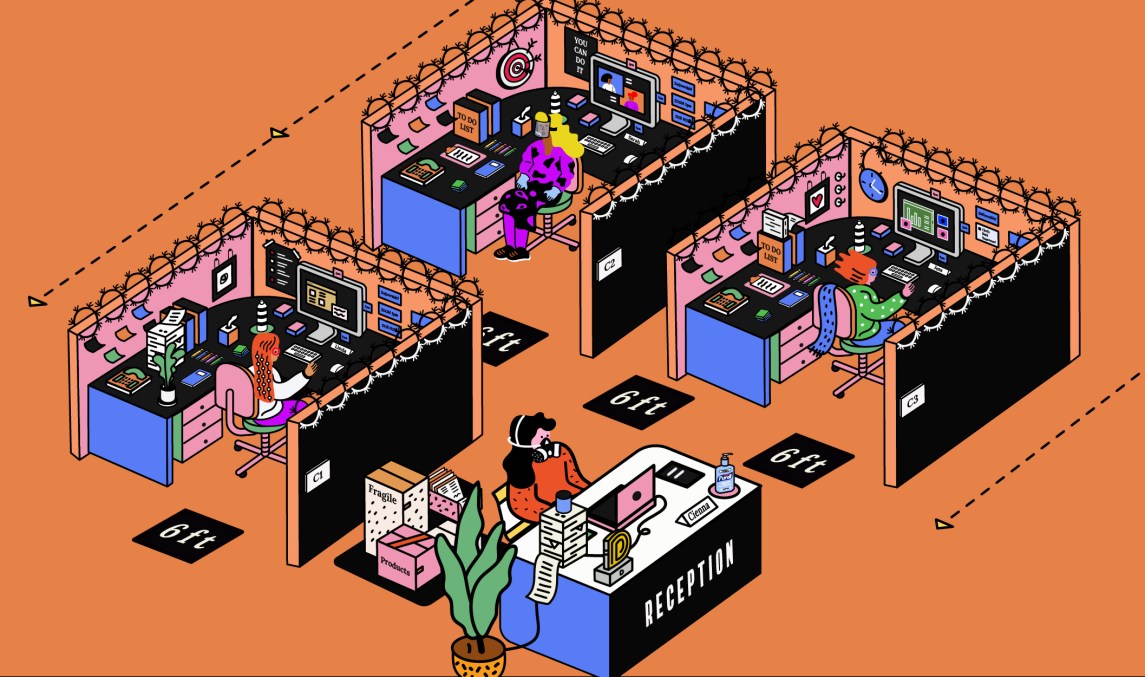 It’s your worst nightmare. Imagine throwing a serious amount of money at your new 32,000–square-foot office in Baltimore and then Covid-19 happens. Only a small proportion of staff can come in when it opens and then another spanner is thrown in the works. “It was open for two weeks and then it had to be shut down after the cleaner had Covid,” said Mark Deeprose, vice president of real estate and facilities at digital agency Jellyfish. “It can be demoralizing,” he said of the situation. “Coronavirus has thrown up a lot of challenges.”

Like many people charged with managing offices, Deeprose is encountering headache-inducing problems. With many employees now working from home — in the UK alone, 60% of the UK’s adult population is doing so, according to research by Finder — what does this mean for the role of the office?

“Covid has forced us to rethink,” said Deeprose. “It means the traditional approach of everyone having their own desk is gone. We can’t have a desk that is empty 40% of the year.”

Jellyfish, which expects employees to work from home 40% of the time, will introduce desk-booking software in January to understand how often people are coming in and where they’re sitting. The software will help the company control how many people are in the space, identify which desks need cleaning and those that can be used after 24 hours, he added.

With vaccines being rolled out later this year, employers are looking at ways to make the future of the work hybrid. Many believe that we’ll see the disappearance of the open-plan layout, where spaces are filled with traditional banks of desks.

“The workplace used to be just for work — getting your head down and clocking in and out,” said We Are Social’s New York managing director Ben Arnold. “What we’ve seen in the past nine months is that employers in general have a greater level of trust in employees.” Now the role of the office needs to be reimagined.

Companies need to consider the benefits of a physical office which have included encouraging interpersonal relationships, the social elements, the almost unplanned elements and reconfigure them, Arnold said. For instance, the typical desk layout of lines of desks and pods that currently dominate floor space can be redesigned informal casual breakout spaces designed for time.

What it will result in is a more informal environment that encourages collaboration. “Maybe one with white boarding everywhere and flexible furniture where you can take down the walls,” Arnold said.

Before Covid-19, Sarah Baumann, managing director at digital marketing agency VaynerMedia UK, was already checking out new office space to accommodate the agency’s growth from 60 members of staff at the start of the year to 90. However new considerations have come to light following the pandemic.

“Choosing somewhere where people have a variety of routes and commuting flexibility has been fundamental,” she said. “Bike space and showers always were important, but more people will be cycling so looking at whether that provision is safe has also been high up on the list. I also started to value air con systems and technical quality of refit far more highly than I ever thought possible.”

Jason Cammorata, senior vice president and global head of operations at MDC Partners, feels fortunate that the company recently combined 13 agencies to one office in the One World Trade Center in New York.

“It had already been built for nimble, flexible environment in the first place,” he said. One of the features that lends itself to the new way of working is its tech infrastructure. “It’s a wireless environment,” added Cammorata. “The technology conference was always voice-activated but we did make some changes to the kitchen and bathrooms so it’s all touchless.”

For example, soap is dispensed with a wave of the hand and the coffee machine turns on with an app.

Many offices that are allowing staff to return are asking they do so in limited numbers to reduce risk of infection.

“Some of our staff admitted to struggling working from home,” said Stephen Kenwright, co-founder of Rise at creative SEO agency Seven, whose office has increased the frequency of cleaning and is allowing a maximum of 15% of the team to come into the office.

Agencies all believe the pandemic will lead to a marked shift in the way they communicate with teams and clients.

“Counterintuitively, working remotely has brought us closer together in many ways, removing some of the geographical boundaries that previously existed between offices,” said Ed Hill, managing partner of media agency Space & Time. “I have spent more time speaking to some colleagues around the UK in recent months than ever before. The same is true with our clients; getting everybody around a virtual table is quicker and easier than traveling across the country, and so it often happens more frequently.”

Still in the midst of a pandemic, agencies admit they’re taking it day to day.

“It’s difficult to know really what is going to happen,” said Deeprose. “We will adapt, but the exciting thing is that it has forced us down a path that we may not have considered before. Now we need to rethink how the space is used and how we can collaborate rather than come in to sit at a desk all day and work.”

How challenging is it to manage a team purely via video?

It’s an issue that gets harder to spot when you’re not around people to pick up on non-verbal cues that might indicate they’re feeling that pressure. It’s also compounded by those moments of connection with other people that put people at ease. That’s harder to do over a Zoom call. Good leadership or management is about being compassionate. It’s recognizing that when you as a leader do call someone at 7 p.m. because you’re still at your desk working late, that it’s done with respect. You say ‘I hope I’m not disturbing you’ in recognition that you might be working but that doesn’t mean that they are — that’s just about being a human being and empathetic. Leaders need to remember that they’re responsible for human beings who have priorities, and are only productive for certain hours of the day. They need downtime, have relationships and have their own emotional needs too. You can’t treat them like robots.

How important is HR here?

HR comes into its own. Having people who are trained to spot instances like when people are feeling presenteeism pressure and then be discreet and respectful about how they broach the subject is invaluable.

What can agency leaders do to better support teams working remotely?

In the absence of physical proximity we need to replace one ritual with another because rituals help us get into a groove, into something that’s systematic. So if you can’t see someone then maybe it’s incumbent on the team leader to check in with people regularly, just to ask how they are. A leader I know does something he calls a weather forecast at the beginning of every meeting, to see how everyone is feeling. It’s quite unusual when you’re in one of those and it can be quite disarming at first, but it has become ritualized and people will say ‘you know what I had a tough day yesterday but things are better today.’ People are prepared to do that on that call.

Quote of the week:

“I’ve seen senior newsroom execs doing videos with people on social media on mental health who I know don’t really care — they are treating it as a PR project and not dealing with it as a fundamental humanity issue. Why can’t people just do the right thing, there is always an excuse — that they’re too busy. If someone broke their leg they would be off work. But if it is a mental health issue, people think they are slacking.”

—Shirish Kulkarni, community organizer at The Bureau of Investigative Journalism

— 72% of 3,200 executives polled by Deloitte said the ability of their employees to adapt, reskill and assume new roles would be a priority for navigating future disruptions. Only 17% said their organizations were ready to do so.

— 23% of 35,000 marketing, advertising and communications executives surveyed globally by WeTransfer said the state of their mental health has affected their creativity during the pandemic.