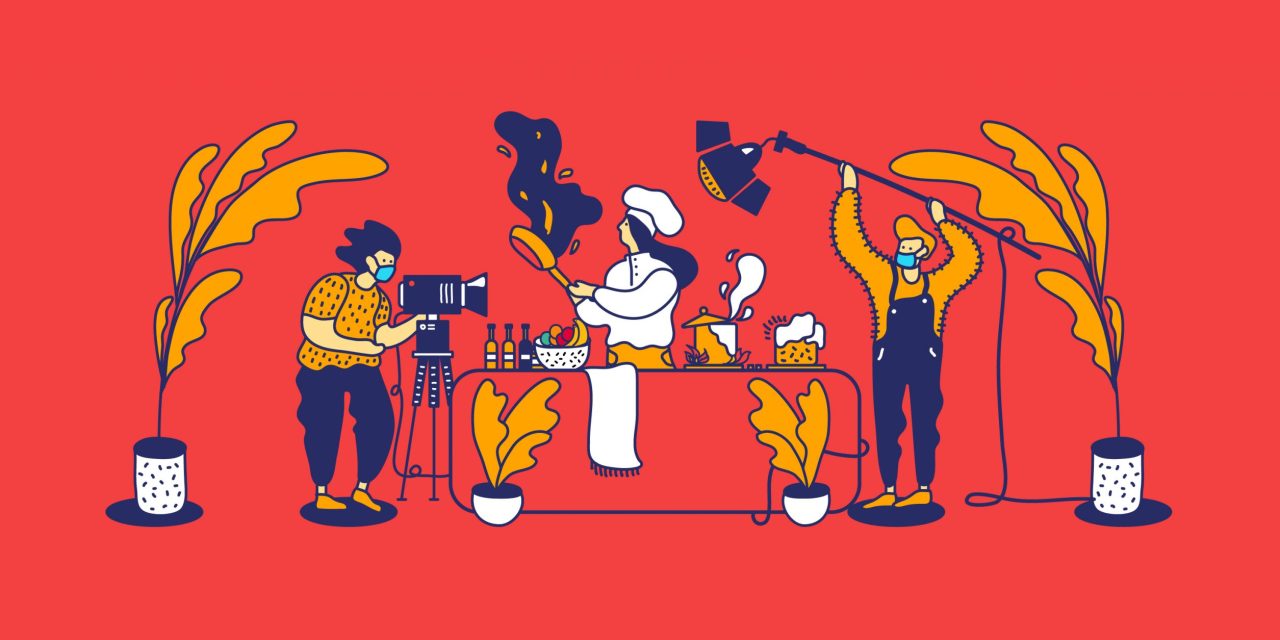 As publishers begin to write out their recipes for their returns to the office as coronavirus restrictions slowly ease, food publishers with test kitchens are already baking plans to turn the heat back on their productions.

Since as early as June, Tastemade, Trusted Media Brands’ Taste of Home, America’s Test Kitchen, BuzzFeed’s Tasty and Meredith’s EatingWell have allowed portions of their test kitchen staffers back into the studios they had to abandon in March.

But they are not simply opening the floodgates. The test kitchen directors that Digiday spoke with from these publications said they’ve been testing out different methods for how and when their staffs are allowed to be in the shared workspaces, including teams, zones and alternating schedules to keep as few people coming in contact with each other as possible.

Back in action, from a distance

Taste of Home initially used a “team model” that broke up the studio and test kitchen staff into A and B teams, Sidner said. Those two teams alternated going into the office every other week.

“That allowed us to test out all the safety precautions and procedures that we wanted to put in place to make sure that everyone felt safe and make sure that no one got sick,” said Sidner.

On July 7, she said the team advanced to its current plan, the zone system, that allowed the nearly 20-person team into the studio all at the same time, but kept them in two separate kitchen studios.

Zone one and zone two both have four to six members consisting of video, test kitchen and studio staffers, and then the crossover team consists of eight to nine managers and prep kitchen people who provide additional support from a safe distance.

Tasty has a similar model in place with no more than three people, including a producer, a culinary assistant and a camera assistant, dedicated to a shoot. Then there will be shared roles that float to up to three sets at once, including a culinary lead, a kitchen manager, a kitchen porter and a production manager. However, the the bulk of the brand’s projects are still being created, shot, edited and published remotely.

America’s Test Kitchen is doing a 4-10 system, which has half of its 20-person staff come in one week for four days (Monday through Thursday while observing summer Fridays) and then that team stays home the next 10 consecutive days, or one work week, while the other half of its staff goes in for its week.

Photography operations was one of the biggest reasons that ATK’s staff wanted to get back into its test kitchen studios because while the photographers were working from home, they were not able to get help from the prep cooks or kitchen assistants. They had to do everything from make the food to cleaning up afterwards which slowed their day down to the point where they were only shooting one or two recipes a day. Now that they’re back in studio, they can do their normal pace of six to eight recipes daily.

EatingWell’s mission for returning to its test kitchen was to figure out a way to streamline its recipe testing operations, according to Price. Since March, her team had been cooking all of the recipes themselves in their homes and then discussing the food over a video chat, which was eating up a lot of time.

Now each chef is given their own closed test kitchen to create all of their five to ten recipes for the day. After cooking, all of the taste testers on staff collect their samples and try them in isolated offices where they can safely remove their masks. Productivity since lifted and the team is pacing where they are supposed to be, Price said.

Both Taste of Home and America’s Test Kitchen now have one entrance and exit point in their buildings to keep a consistent one-way flow, and Bishop added that that they have given staffers check-in times in five minute increments for their arrival every morning.

And before employees can come into the office, Taste of Home, America’s Test Kitchen, Tasty, EatingWell and Tastemade all require their employees to do a digital health survey that gets submitted every morning. Questions include whether or not staffers have been exposed to a COVID-positive patient, if they have any symptoms of the virus or if they have traveled out of state in the past 14 days, and it requires them to take their temperature.

Tastemade even requires an FDA-approved negative COVID-19 test 10-days prior to the their first shoot, and then monthly thereafter,
according to Dameron. Larger shoots will require more frequent testing.

Masks are required throughout the publishers’ offices, aside from closed offices and conference rooms that have been transitioned into temporary dedicated workspaces for single employees. However, a spokesperson for Tasty said that on-camera hosts are not expected to wear masks, though everyone else in the studio during filming is required to.

Most of the publishers said that they are seeing an added budgetary increase associated with these new ways of working. Tastemade’s Dameron said there is a potential increase of 15% to 20% in the budgets for in-studio productions now with the added safety measures, while field productions tend to cost even more because of the added “social bubbling” procedures.

But beyond the physical products that have to be purchased, the increase in time that it takes to complete a shoot has added to the production budgets. Dameron said that shoots can take up to 50% longer now.

“Every schedule we create needs breathing room for enhanced cleaning and careful consideration for coordinating a big production with fewer people. It is certainly a new way of working,” said Dameron.

Some projects work better at home

Half opened studios and pared-down production teams means that there is also a very different atmosphere in the test kitchens.

Because of this, ATK’s flagship public access show “America’s Test Kitchen” is still filming its upcoming 21st season from home using a single camera person who will operate three cameras and control the sound and the lighting from the hosts’ homes.

“Rather than do a watered-down, sad version of our television show with one person in a 2,000-square-foot set with nobody in the background, let’s just shift it at home,” said Bishop.

However, shooting at home means that the 26-episode season, which normally takes three weeks to film in studio, will now take 10 weeks, according to Bishop. On top of that, production was also delayed from its original start date of April 6 to July as the team waited out the health crises.

Conde Nast’s cooking title Bon Appétit is resuming its uber-popular video production in September from hosts’ homes, following a three-month hiatus from production, according to a spokesperson for the brand. The spokesperson added that there are no current plans to return to the company’s One World Trade Center offices, at least in the same capacity as pre-pandemic.

While the publication had created some remotely produced video series at the start of lockdown, the production hiatus came after public accusations were made about BA’s leadership’s treatment and compensation of BIPOC staffers in June.

Hearst’s Delish also does not have plans to return to its test kitchen, according to Delish editorial director Joanna Saltz. She said that while the test kitchen had an endless supply of tools and cooking equipment that might not be available to staffers from their homes, their test kitchen was only able to comfortably film two people at a time. Since moving remote, however, six to eight people are shooting from their home kitchens on any given day.

And whatsmore, not having access to the test kitchen equipment has allowed the team to turn into home chefs and prepare the recipes in the way that their audience would prepare them from their homes.

“At the end of the day, none of us want to end up with a sink full of dishes,” said Saltz.

Still, the allure and convenience of a fully operational and resourced studio kitchen and staff is is probably undeniable.