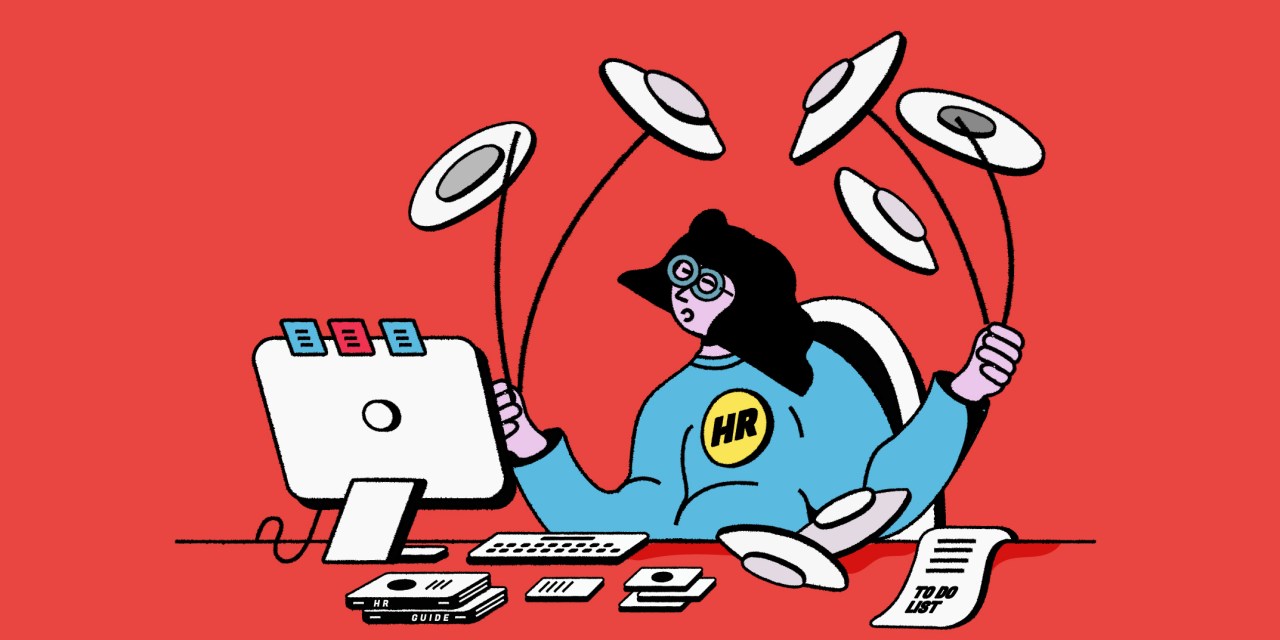 The role of a human resources director has traditionally involved juggling responsibilities — but never so much as during the coronavirus pandemic.

“It has always been our job to be equal parts coach, mentor, enforcer, therapist, manager, expert and sometimes, lawyer,” said Jamie Coakley, vp of people at the New York-based IT firm Electric. But amid the COVID-19 crisis, she added, “I felt some days that I could go work for FEMA [Federal Emergency Management Agency], maybe a crisis organization, or go into the medical field as a next step with how quickly things escalated. Some days I was an amateur nurse documenting employee symptoms, other days I was just a helpful ear.”

As its role is to be directly responsible for employees and employee-related issues, the HR job is inherently challenging. Dealing with individuals and their unique needs, all the while managing the execution of company and government policies, often means bridging a gap between what a person needs and what the organization can do. But making employees feel safe has been uncharted territory. “My job really pushed the boundaries of providing some level of physical and mental health care for employees,” Coakley said.

Last March, when the media started to warn of an impending public health crisis, consumers were bombarded with misinformation, leading to widespread feelings of stress and anxiety. Coakley’s firm swiftly communicated to its employees that their health and safety were the company’s first priority. It made weekly updates and check-ins a priority, and accommodated flexible hours around childcare needs. “We have continued to take the stance that if an issue in the outside world is affecting our employees, then it is an employee issue and we need to be a part of the solution,” Coakley added.

She believes the role of HR has changed forever with the pandemic. “In the coming years, we will continue to see HR in the most progressive organizations prioritize the personal health, mental health and general well-being of their teams,” she said. “There will be increased awareness around mental health, therapy, childcare and time-off policies in months to come. And for years to come, I believe we will see healthcare provided onsite and access to medical care for all workers.”

Kim Nguyen, director of people operations at the New York-based fintech firm Alloy, noted that HR professionals have not been immune from the difficulties all employees in an organization face. She found herself consistently emphasizing the need for her company’s employees to take PTO — even as she ended up taking very little herself.

While HR people have been in charge of figuring out how to maintain any sense of workplace normalcy and employee wellness, she observed, no one has really been checking in on them.

Noting her involvement with organizations of HR professionals during the pandemic, Nguyen said, “You could really see people getting tired, burned out, drained of energy and enthusiasm. It went from ‘We can do this!’ in the beginning to ‘You know what? I need to take a little pause for myself here.’”

To take better care of herself meant re-evaluating her own day-to-day schedule. She now has blocks on her calendar for personal time, drawing a clear line between work and home hours. She also noted the importance of accepting that she didn’t always have the answers — which is ultimately a positive thing. “A lot of things went out the window when COVID hit,” Nguyen said. “When you admit you don’t know all the answers, you can drop the ego, and seek out others to be more innovative and thoughtful with solutions.”

It is also essential that HR people ask for help themselves when they need it, she added.

Nguyen’s firm has employed policies to aid employees during the pandemic including free therapy sessions and regular messages to the staff from the CEO. It also regularly reviews PTO for all its teams, and if it notices someone is not taking enough time off, they get nudged. It is also important for companies to adjust perspective and shift away from goals that are set in stone – keeping empathy top of mind and setting expectations around realistic objectives instead.

Also, companies and their employees must not hesitate to shake up their routines. Nguyen noted that on a recent morning, she realized she hadn’t been out of the office for four straight days. So she proposed to her boss that they do their weekly one-on-one meeting that afternoon in a nearby park instead of over a Zoom call.

Kristi Roe, head of healthcare experience at Medallia, a global customer and employee experience company based in San Francisco whose clients include Mercedes-Benz, Sephora and Samsung, observed that HR officers have gone from the shadows to front and center during the pandemic.

“There became this sense of urgency in regard to remote work — how were we going to keep people safe, help them take care of their families?” she said. In the early days of the crisis Roe became somewhat of a “childcare guru,” helping employees with their family needs. “People in HR worked tirelessly. We worked weekends. So much landed on our plates,” she added. Being at the center of this new work arrangement meant lots of flexibility and communication. Now HR is transitioning from running as fast as it can to “going deep. It’s not a race anymore. It’s about getting it right.”

Typically, most employees don’t regularly interact with HR. But that has now changed dramatically as they’ve had to become adept at communicating with, and listening to, employees, added Roe.

Mental health continues to be a priority, and something HR reps have had to learn fast. Paying attention to the wellness of employees is tied directly to employee goodwill and retention. “If we are your employer, you are expecting us to do more in the way of mental health,” Roe said. “What programs do we offer? What is our benefits structure? Do we have a culture that supports well-being? It’s an opportunity for HR to become transformative.”

Now that the focus is on bringing people back into the physical office, “employees see the role HR plays in their lives,” she said. “There’s an incredible opportunity for HR to lean into that.”

3 Questions with Jon Schleuss, president of the Newsguild

What’s the biggest variable your shops are dealing with around returning to an office?
Safety is at the very top. You can look at different employers — we have probably 200 different news media employers — and if the workers are vaccinated, and the vaccines do appear to be working, then I think there’s a personal choice to do more work. We’re trying to find ways to prioritize the health and safety of people like photographers, who have to go into spaces like hospitals. In the actual physical newsrooms themselves, it’s making sure people are adequately spaced and that the ventilation systems are improved. The biggest thing for our people is making sure they do really effective surveys of people. The local union we have in L.A. did a survey of members there and found that only 2% wanted to come back to the office five days a week. A big part of that is the traffic in L.A., and the office being in El Segundo, but people have saved time and that’s allowed them to do more of their jobs.

Do you think that in the future, newsrooms will be more distributed?
I definitely do. People, for most of the last year, have worked remotely. They’ve gotten pretty comfortable with that. At the same time the company needs to ensure their health and safety. Companies need to provide ergonomic chairs and desks so they can do their jobs. There are far too many people who are hunched over a laptop at their dining table.

Do you think that the pendulum now begins to swing back toward what we knew in early 2020?
I was one of those people who thought things would be better by the summer. I moved to D.C. to do this job, and then three months later we shut down the union offices. I’ve worked from home pretty much ever since. It does seem like the vast majority of employers are looking to return to work in limited capacity this year. This comes back to what’s the most effective thing for journalists looking to do their jobs. They could be working from home. If it makes them a better journalist and it gives them time have a life outside of their job, that’s a good thing. Journalists are bad about having lives. We need to think about how and when we work from home, there are things in place that make it possible to turn off Slack or put your phone on airplane mode when you take a day off. — Max Willens