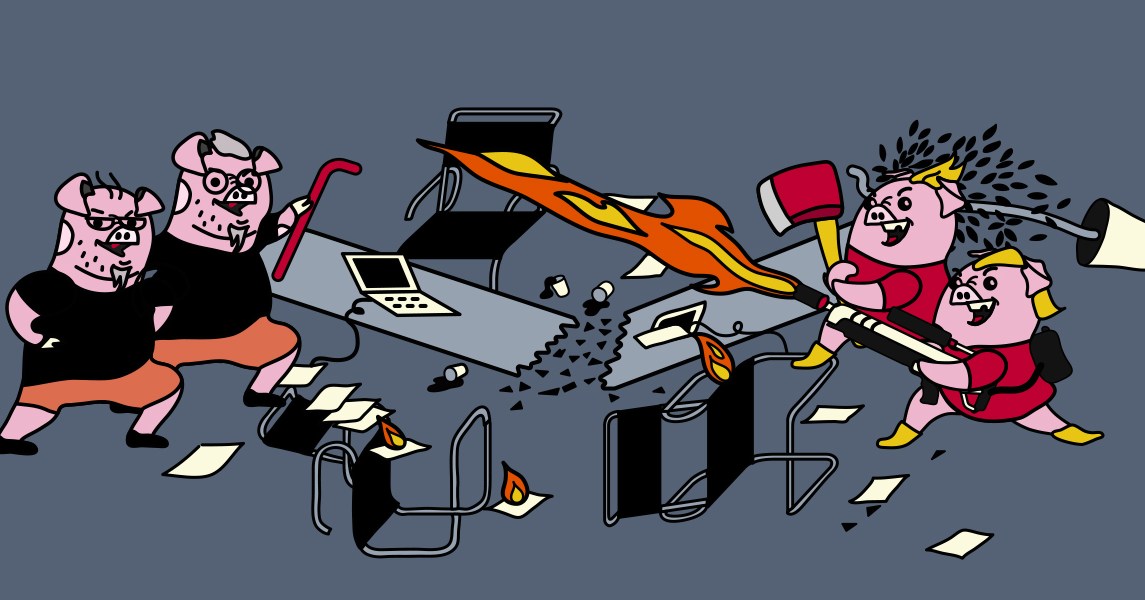 When most office workers in the U.S. packed up their laptops, monitors and desk plants around Friday, March 13, there was a kind of solidarity to it. The great work-from-home experiment and diaspora had begun.

That solidarity shattered near immediately. By Monday morning, when the Zooms flicked on, it was evident that everyone’s experience during this time was not going to be the same.

“I was sitting in my studio apartment in Kips Bay and I was looking at [my boss’s] view — she has these top-to-bottom windows all looking directly out at the ocean,” said one copywriter at a New York agency whose boss had apparently fled to Montauk over the weekend. “And I was like, wow, OK the next few months are not gonna be the same for us.”

Indeed, class warfare had arrived in the American workspace once staffers decamped to their home office settings, only to be socioeconomically outed, on both sides of the spectrum, by Zoom.

After all, the office and its trapping were great (superficial) equalizers, with everyone getting the same amount of desk space and the same snacks available for more. Yes, you may be getting paid less than your boss, but you were all taking the same subway in, complaining about the same office minutiae, subject to the same vagaries of office airconditioning.

Class warfare at work isn’t new, but it’s certainly accelerated. The big difference now is that the professional-managerial class, the term coined by Barbara and John Eirenreich back in the 1970s, is now leading the uprising.

As Jacobin assistant editor Alex Press notes, media, and many other professions like it, are classic examples of the PMC: they have more autonomy and freedom than the working class, but also work for someone. They’re in the middle: They’re neither proletariats, not bourgeois. The choice most of these professionals have is that they can either side with the bosses, or side with the working class.

“What we’re seeing is that they’re picking a side,” said Press.

It’s appeared in many different forms. Beyond it hitting you in the face every Zoom call, the coronavirus, the resulting economic crisis, and in more recent weeks, the wave of protests across the U.S. shedding light on system racism and toxic work cultures have all underscored a basic truth: The workplace, like society, is not equal.

At Conde Nast, where 100 people were laid off due to the coronavirus, the editorial union at Wired blasted the company for the meager severance packages offered by the company, which happens to be owned by the billionaire Newhouse family. At the Atlantic, another billionaire-owned publisher, 17% of its employees were laid off.

In general, there has been a backlash against the perceived elites, those in power, who have had enviable quarantines — and lives. It’s come into sharper contrast in the past two weeks, since George Floyd’s murder in Minneapolis, and the conversation around racial justice and systemic racism that’s emerged. While it’s been about police brutality, it’s also been about Black (and minority) experiences in the workplace, workplaces that have until now been led — 92% of them — by white men.

At Bon Appetit, staffers came out with stories of toxic racism that led to the resignation of editor in chief Adam Rapoport. At Refinery29, editor in chief Christene Barberich stepped down after Black employees told personal stories of racism and their experiences within the company, collected by a #BlackatR29 hashtag. At the Wing, CEO Audrey Gelman is resigning, months after reports emerged about mistreatment of Black employees at work. Leandra Medine is “stepping back” from Man Repeller.

It’s the same feeling the agency copywriter had: “I just have this sudden realization of what I do and the money I make and my place,” she said. “And it’s all happening at once, and I don’t really like it.” (Underscoring this too is that without her office, the free food, the parties, drinks and perks, her work itself is far more stripped down to its basics.)

After all, modern class warfare was already on display even a few months ago. Private Slack channels were the scenes of employee activism, used for organization and information gathering. Labor unions came to digital publishing. Even just politics — long considered among taboo water cooler topics, along with religion — entered the workplace with a vengeance over the past few years.

At Whole Foods, the whole worker movement asked for better conditions at work, while at Microsoft, there were employee protests over ICE contracts. Walmart workers walked out in August last year, asking the company to stop gun sales. SHRM’s own data found that 75% of workers think they have the right to speak up against their employer. (That number climbs to 82% for millennials.) Four in 10 American workers consider themselves activists.

This wasn’t just in the office, of course: Writing in The Atlantic, Olga Khazan appropriately describes how social distancing was possible for the rich, while for the many delivery drivers and grocery stork clerks out there, it wasn’t possible at all — the essential workers happened to also be some of our poorest ones.

There is an accompanying cultural schadenfreude, the side dish to “cancel culture,” which sought to boycott any person, phrase, brand or company for making a mistake. That mistake can be small or big, but the boycott is real. Some of the cancelation is a bit of a comeuppance of the elite—a way of readdressing a balance between rich and poor, have and have not.

The uprising, in many ways, is already here.