In need of a place to set up shop and rub elbows with likeminded refugees, new Miamians have headed to Soho House, the international chain of private clubs with locations from Mayfair to Mumbai. 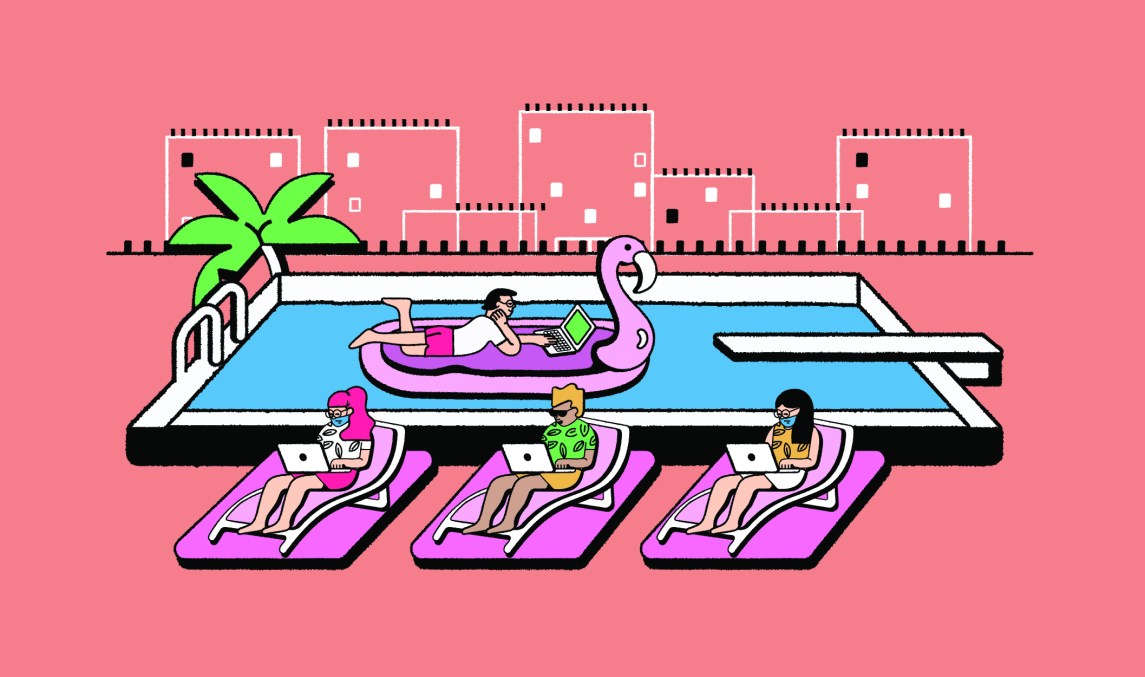 No place has benefitted more during the pandemic than Miami, which has seen an influx of tech, media and creative types seeking sunshine, relaxed coronavirus protocols and a favorable tax climate.

Underscoring this trend, the Japanese conglomerate SoftBank recently announced a $100 million fund for startups setting up shop in the city — one of the clearest signs yet that this is the boom town of our times.

In need of a place to set up shop and rub elbows with likeminded refugees from places like New York, Los Angeles and San Francisco, many Miamians have headed to Soho House, the international chain of private clubs with locations from Mayfair to Mumbai. Dubbed Soho Beach House for its location in trendy South Beach, steps from the clear, warm-bath-like waters of Atlantic, the club is housed in a 15-story, Art Deco-style tower featuring a private beach, a pool, a gym, multiple bars, a library and plenty of indoor and outdoor work and meeting spaces. A corner table at Starbucks this is not.

Bored of doing Zoom calls from home, Moksha Fitzgibbons, president of the social shopping app Ntwrk and former chief revenue officer of the media company Complex Networks, started heading to Soho House, where he could work while looking at the ocean instead of the same four walls.

“It’s like walking into a New York or L.A. experience. I’m always running into people in the industry — it makes for a good networking situation,” he said. One of the other nice things about it is that the club is relatively strict about where business is conducted – laptops in the restaurant or bar are frowned upon. Fitzgibbons calls that a positive, “because otherwise it just turns into a WeWork.”

The appeal of Miami has always been obvious, for all the reasons mentioned up top and so much more, which is why Fitzgibbons — a New Yorker who’d been a longtime visitor to South Florida — decided to put down permanent stakes with his family there several years ago. But over the past year, he’s noticed, the stream of newcomers has become more like a gusher, especially among tech and media people from New York and California — and a lot of them have made Soho House their HQ. (Not everyone. One of Fitzgibbons’ acquaintances, a tech entrepreneur who’s new to town, is running his company from a boat.)

Miami is suffering some of the pains that go along with being a hot city. For one thing, traffic, always a problem there, has never been worse. But for many, the tradeoff — outdoor dining year-round, no state income tax, and, as Fitzgibbons notes, a three-bedroom house with a pool that goes for what a one-bedroom luxury apartment in New York would typically cost — is worth the minor inconveniences.

“When I go to Soho Beach House, I’d say the majority of people are from New York City most days,” said Alex Ragir, co-founder of Storyhunter, an online marketplace for creatives, who switched his company to fully remote during the pandemic and packed his bags for Miami — for good. “Once we shut down our physical New York office in May, I thought to myself, am I really going to be miserable quarantining in my apartment through this pandemic?” added Ragir. He thinks Miami is the perfect escape due to it being on the same time zone as New York and an abundance of direct flights back there.

“Miamians have always said it was New York’s sixth borough, but I wouldn’t really hear New Yorkers say that,” he said. “Because of the pandemic, I think a lot of people see it that way now.”

Alex Taub, co-founder of a social professional network called Upstream, relocated himself and his family from New York to Miami this past July, signing a one-year lease, which he has since renewed.

But will the magnet that is Miami lose its pull once everybody’s vaccinated, the pandemic fades and life returns to normal-ish? “That’s the billion-dollar question,” Taub said. But he thinks the fact that so many have made the move permanent means that the city will continue to thrive. “The tech community will play a part of it, but it won’t be the only reason why someone stays,” he said.

Others aren’t so sure. “Personally, I think most New Yorkers will go back to New York after the pandemic,” said Ragir. At the least, however, many who’ve decamped there during Covid will continue to make Miami a regular destination, possibly buying second homes there, he believes.

For his part, Fitzgibbons predicts that 40-something year olds with families who have put down roots have “figured out how to work from down here” and will be staying. As for younger, single people? Maybe not. “At the end of the day, New York is the best city with the most opportunity,” he said. “It really is the center of the world.”