The great sucking sound: Automation has made media buying harder

While industry folks have deliberated the man-versus-machine question, automation in the form of programmatic advertising has upended the media buying process, changing many of the jobs required to run a campaign. Machines are simply better and faster when it comes to gathering insights, testing ads, learning what works and optimizing the result. But the dirty secret of programmatic advertising is that it still requires an awful lot of people. 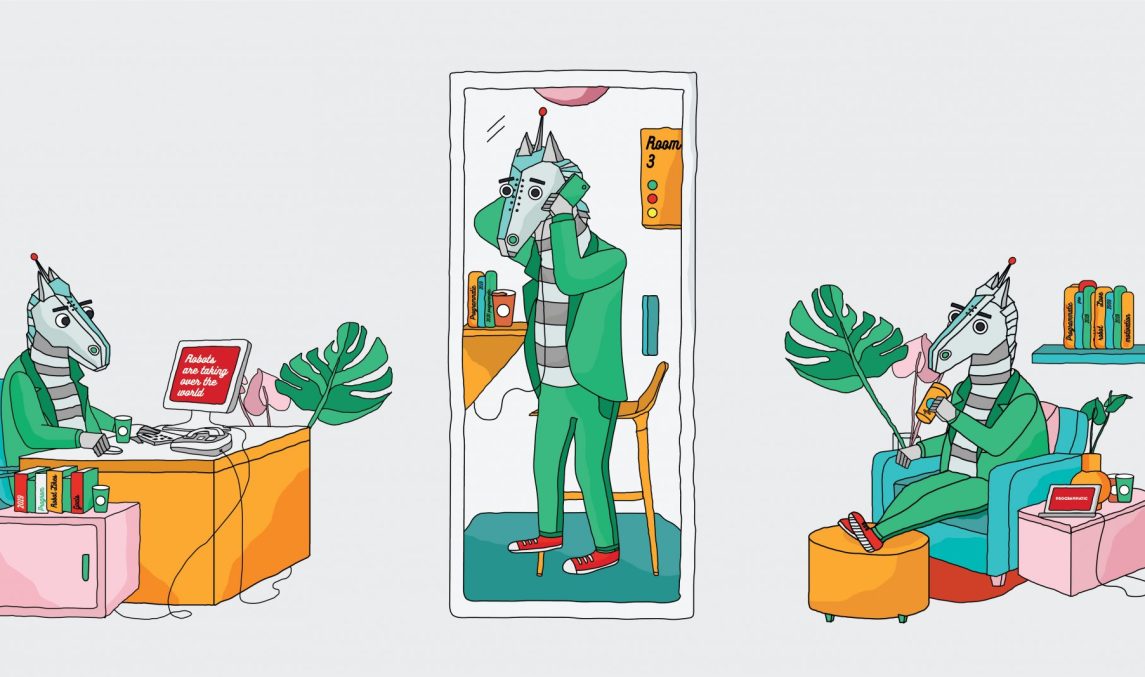 Unplug the router, cut the power cord, code the algorithm. Automation and artificial intelligence are becoming better at doing the jobs of advertising execs. The days of sealing ad deals by phone, emailed insertion orders and the occasional liquid lunch are no more.

While industry folks have deliberated the man-versus-machine question, automation in the form of programmatic advertising has upended the media buying process, changing many of the jobs required to run a campaign. Machines are simply better and faster when it comes to gathering insights, testing ads, learning what works and optimizing the result. But the dirty secret of programmatic advertising is that it still requires an awful lot of people.

“The promise of automation has led to more people needed to do more complex things but that’s because of the existing general infrastructure for campaign management that revolves around spreadsheets, notebooks and Post-it notes,” says Adam Ray, CEO of independent ad tech vendor 59A.

This is a story that’s largely played out across the global economy. While many preached doomsday scenarios for automation obliterating work, unemployment rates in most advanced economies are at historic lows. Economies tend to adapt to technological change and for every job lost to automation, a new one is often created, albeit sometimes requiring different skills.

This is broadly the story taking place in ad buying. By taking away the easy parts of running campaigns, automation has made the harder parts of an ad buyer’s job even harder. Dated campaign reporting methods still seem to be the norm rather than the exception, despite the automation of the media buying process. Half of the campaign reports assembled by programmatic advertising traders from November 2018 to January 2019 were created manually, according to 60% of the 93 respondents surveyed by ad tech company CtrlShift. Just because a job can be automated does not mean this will happen. A cacophony of economic and organizational factors within agencies has restricted the spread of automation to all parts of campaign management.

Tighter constraints on a campaign, whether its viewability, brand safety or the potential for fraud, mean more work; each one of those variables requires a report; such reporting is often submitted on a weekly basis, Faulkner says. Once fully automated, Mindshare’s campaign reporting will be available to agency execs from a dashboard that collates how the ads are performing in real time. Rather than spending all their time aggregating information from different sources, the agency’s traders can sift through the data and more quickly react to it.

“Automation hasn’t made the operational process of running campaigns any easier,” says Alexis Faulkner, who heads Mindshare’s performance division Fast in the U.K. In fact, her team is spending a considerable amount of time these days making sure campaigns meet advertisers’ specific needs. When advertisers want to be sure that a particular client has the best possible chance to see its ad paired with a news story from a trusted site and not one about a contentious topic, those conditions are often manually entered, Faulker says.

As inefficient as these processes can be for agencies, when algorithms and software platforms work in harmony, the results can be lucrative. Mindshare’s sister agency Essence has built its own campaign management platform Olive, which the company claims can outperform the effectiveness of human media buying decisions 40%, while lowering costs 35%. And the success of this platform appears to not have cost jobs. Essence is currently advertising on LinkedIn 93 jobs (including trader and data scientist positions), with 70% of the openings focused in some way on buying media or managing the technology that does so.

“It’s important to acknowledge that a lot of roles in programmatic have changed, but if anything there are more of them now, not less,” says Amir Malik, an Accenture Interactive digital marketing expert. “The way that these roles develop in the next couple of years will be really important. As with any automation technology, its role should be clear — to enhance the role of the human, not to replace it outright.”

Fewer people with arts and humanities skills are being recruited in favor of individuals with science, technology, engineering and mathematics knowledge, says Richard Dance, the chief digital officer at Publicis Media’s Spark Foundry. “We’re looking for a blend of high emotional intelligence and strong analytical skills,” he says.

As the programmatic advertising matures, agency recruiters are trying to keep pace. After all, it’s one thing for a trader to trust that an algorithm has good data but another to just let it do all the work. Gone are the days of trusting mysterious algorithms. Consequently, automation is reshaping agency workforces. And it will transform 80% of the jobs within agencies by 2030, Forrester has predicted, with agency execs starting to see the beginnings of this transformation next year. Account executive and project manager roles will begin to merge, per Forrester. But this transformation won’t come without sacrifice. Roles linked to skills in production, project management, account management, strategy and creative tasks will have many of their responsibilities automated via workflow platforms and automated media and creative technologies, according to Forrester.

“Traditionally, we would’ve employed people who were good with clients and whose job it was to book inventory,” Faulkner says. “Now, we need technical people. We need specialists who understand how to run campaigns on different platforms. The problem is, clients want generalists who can talk across all their marketing.”